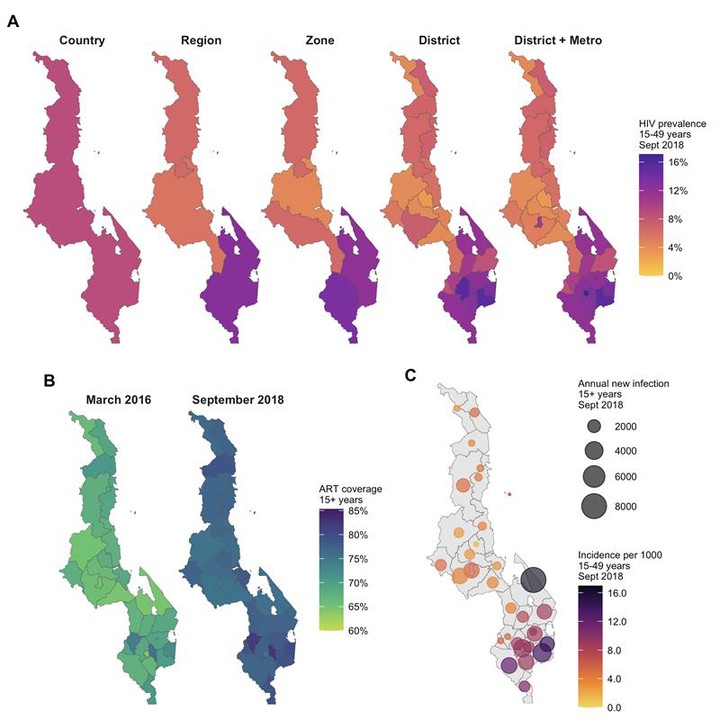 Methods: Small-area regressions for HIV prevalence, ART coverage and HIV incidence were jointly calibrated using subnational household survey data on all three indicators, routine antenatal service delivery data on HIV prevalence and ART coverage among pregnant women, and service delivery data on the number of PLHIV receiving ART. Incidence was modelled by district-level HIV prevalence and ART coverage. Model outputs of counts and rates for each indicator were aggregated to multiple geographic and demographic stratifications of interest. The model was estimated in an empirical Bayes framework, furnishing probabilistic uncertainty ranges for all output indicators. Example results were presented using data from Malawi during 2016-2018.

Results: Adult HIV prevalence in September 2018 ranged from 3.2% to 17.1% across Malawi’s districts and was higher in southern districts and in metropolitan areas. ART coverage was more homogenous, ranging from 75% to 82%. The largest number of PLHIV was among ages 35 to 39 for both women and men, while the most untreated PLHIV were among ages 25 to 29 for women and 30 to 34 for men. Relative uncertainty was larger for the untreated PLHIV than the number on ART or total PLHIV. Among clients receiving ART at facilities in Lilongwe city, an estimated 71% (95% CI, 61% to 79%) resided in Lilongwe city, 20% (14% to 27%) in Lilongwe district outside the metropolis, and 9% (6% to 12%) in neighbouring Dowa district. Thirty-eight percent (26% to 50%) of Lilongwe rural residents and 39% (27% to 50%) of Dowa residents received treatment at facilities in Lilongwe city.