Age patterns of HIV incidence in eastern and southern Africa 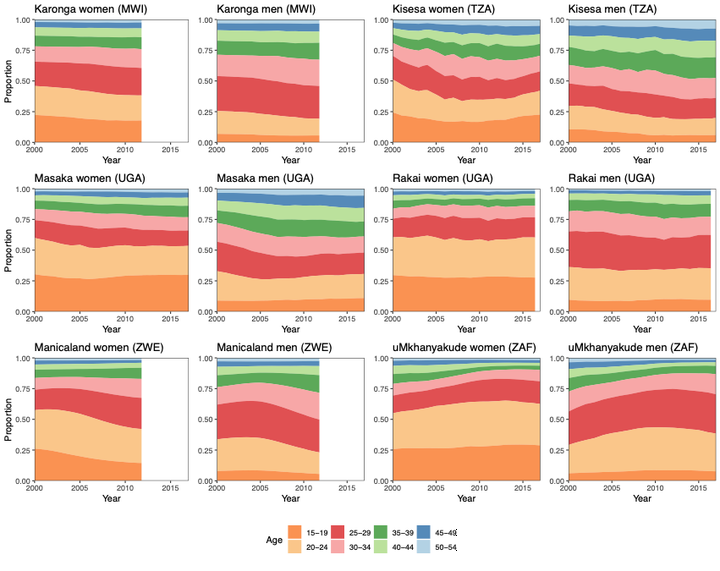 Methods: We used a Bayesian model to reconstruct age-specific HIV incidence from repeated observations of individuals’ HIV serostatus and survival collected among population HIV cohorts in rural Malawi, South Africa, Tanzania, Uganda, and Zimbabwe, in a collaborative analysis of the ALPHA network. We modelled HIV incidence rates by age, time, and sex using smoothing splines functions. We estimated incidence trends separately by sex and study. We used estimated incidence and prevalence results for 2000-17, standardised to study population distribution, to estimate mean age at infection and proportion of new infections by age. We also estimated cumulative incidence (lifetime risk of infection) by birth cohort.

Findings: Age-specific incidence declined at all ages, although the timing and pattern of decline varied by study. The mean age at infection was higher in men (cohort mean 27·8-34·6 years) than in women (24·8-29·6 years). Between 2000 and 2017, the mean age at infection per cohort increased slightly: 0·5 to 2·8 years among men and -0·2 to 2·5 years among women. Across studies, between 38% and 63% (cohort medians) of the infections in women were among those aged 15-24 years and between 30% and 63% of infections in men were in those aged 20-29 years. Lifetime risk of HIV declined for successive birth cohorts.

Interpretation: HIV incidence declined in all age groups and shifted slightly to older ages. Disproportionate new HIV infections occur among women aged 15-24 years and men aged 20-29 years, supporting focused prevention in these groups. However, 40-60% of infections were outside these ages, emphasising the importance of providing appropriate HIV prevention to adults of all ages.